Q: What do Scarlett O'Hara, Carol Burnett and Brookhaven's Hardy House have in common?


A: Ballgowns fashioned from draperies -- the Hardy House being the genesis of one of the more memorable scenes in 1939 movie classic Gone with the Wind, and almost four decades later, one of the funniest send ups ever presented on television, by comedian Carol Burnett.


Probably more so than any other home in Home Seekers' Paradise, the Hardy House is iconic to Brookhaven.  Built with red brick made on site, the Italianate Home on Natchez Avenue at  was built either in 1867 or 1877, depending on which source you choose to believe.


It was occupied for decades upon decades by the immediate and extended family of original owner/builder Capt. Jack C. Hardy, a former ship captain who "hobnobbed with Presidents" and was one of the wealthiest men in the state of Mississippi at the time, being the top "turf man" and partner in the J.M Brown & Co. racing firm.

Unusual for the times, the expansive home had an indoor bathroom on the first floor and featured built-in closets -- luxuries for the day and age, since such items were often taxed at a much higher rate. 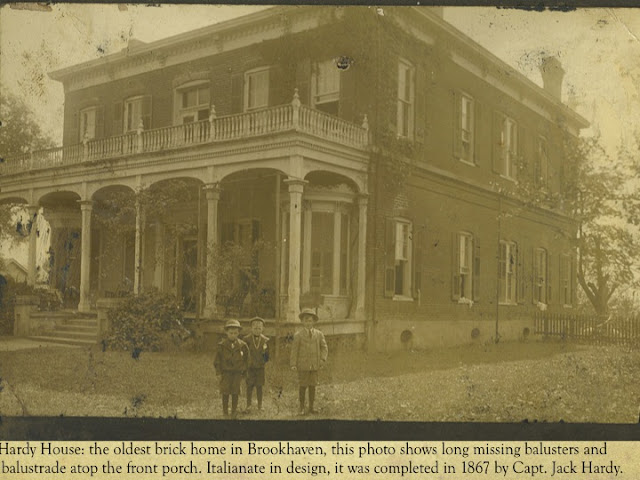 Capt. Jack, having grown up on a horse farm in Hillsboro, MS, owned a string of race horses, which he ran in  and on his track on his Brookhaven equine plantation, which at one time consisted of 3,000 acres and sported a railroad siding alongside the barn.


One of his horses ran the Kentucky Derby, according to local lore, but I have been unable to determine the year and the name of the particular horse*.


For more than 100 years, an oil painting of said horse hung in the entryway of the home, near the stairwell and a stately grandfather clock.


A Most Elaborate Wedding and an Atlanta Connection
Capt. Hardy was known to be a kind and generous man, and his house was always home to extended family, including two sisters of his wife, Ellen Hooker Hardy, and their children**.


There came a time that niece Zula married one Charles Frances Malone of Atlanta in the old wooden framed Presbyterian Church, which, according to newspaper accounts, stood where the former First Presbyterian (built 1906) now stands vacant and for sale on South Jackson Street.

Zula's wedding was a most elaborate affair: orange blossoms were brought in from , as were hundreds of pounds of ice from , and an orchestra to entertain the guests, which included many prominent citizens from .

Elder members of the bridegroom’s family were old friends with the Mitchells of , including their daughter, Margaret.

That connection would prove prophetic.

Having heard a story how a Hardy daughter during the hard times of Reconstruction had used parlor drapes to make a costume for a ball, Margaret Mitchell, remembering that tale, had Scarlett O’Hara do the same in Gone with the Wind.


And the rest, as they say, is American literary (and television sitcom) history.
~
The above information was culled from a History of Brookhaven column by the late Matthews Ard, former town historian, in the local paper, a copy of which was provided by Bettie Hatcher Cox from the archives of her mother, Mary Becker Hatcher; and scanned in by Deenie Tallant. (Many thanks to both.)  Additional information about Capt. Hardy was provided by Dr. Jack E. Tindall's book, Early History of Lincoln County, Mississippi.


The Hardy House was placed on the National Register of Historic Places in 2007.  To view photographs of the interior of the home from 2006, please see this link.


To read more about the house itself, the family history, and to see a floor plan, please see this link to the application to place the home on the National Register.

~
Epilogue: Capt. Hardy died of an apparent stroke in New Orleans in mid March 1889, at age 55, leaving a widow, three sons and three daughters and a sizable estate.


Today, his beloved home is vacant, in foreclosure and for sale.


Its contents, which dated back to the days when he lived there and are visible in the above mentioned photos, were auctioned off, along with exemplary antiques from Edgewood, Brookhaven's largest and grandest home, in November 2010.

~
*His most famous sire and Kentucky Derby contender may have been named Jack Hardy, but further research is needed.

Posted by Sukie Carruth at 5:33 AM