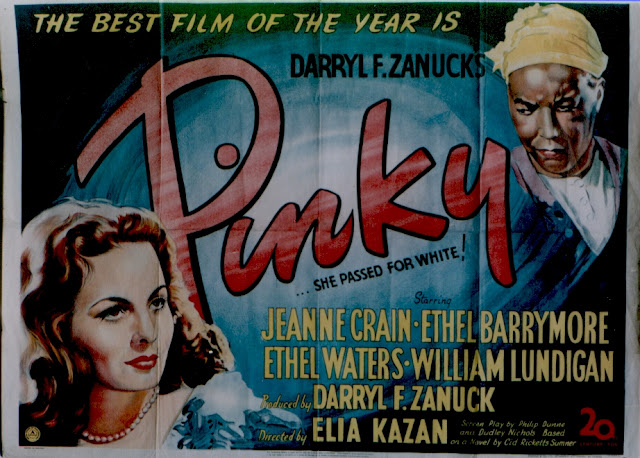 Brookhaven author Cid Ricketts Sumner is best known for the series of novels about Tammy, a veritable female Huckleberry Finn, which gave rise to romantic comedies starring Debbie Reynolds and Leslie Nielsen in the late 1950s and two later sequels starring Sandra Dee in the ‘60s.

But Sumner’s impact on American pop culture was much more significant than quaint stories about a poor but ambitious barefoot Southern girl who has a thing or two to teach everyone else about real life. (Tammy and the Bachelor, Tammy Out of Time are probably the two best known feature films.)

Perhaps not as well known is Sumner’s novel Quality.  It served as the basis of ’s first interracial drama, Pinky, depicting the conflicts and tribulations of a light-skinned Southern black woman “passing” for white while in nursing school up North.

Despite Jim Crow laws and movie censorship boards, the film was widely successful in the at a time the First Amendment rights to free speech did not extend to movies.

The ground-breaking film was not without controversy, however.


The movie manager in , W.L. Gelling, booked Pinky for showing in February 1950. The subject matter of miscegenation did not escape the disapproving eye of the town’s censorship board.

Gelling was forbidden from showing the movie, but he disobeyed the Board’s directive and presented the film anyway in his segregated theater, where blacks were allowed, but only in the balcony.

Gelling was charged with a misdemeanor, convicted and fined $200. It might have ended there, but he appealed the conviction all the way to the U.S. Supreme Court.

At the same time, similar lawsuits were moving through the federal courts on a parallel track. In 1952, after he filed his appeal, the U.S. Supreme Court decided the landmark free speech case of Joseph Burstyn, Inc. v. Wilson , which, for the first time, extended First Amendment protection to films.

The Burstyn v. Wilson ruling sounded a death knell for motion picture censorship over blasphemous and sacrilegious content.  Shortly after that ruling, the Court similarly overturned Gelling’s conviction, thereby broadening the scope and driving yet another nail into the coffin of censorship boards all across the country.

Born Bertha Louise Ricketts on Sept. 27, 1890, in , , to Bertha Burnley and Robert Scott Ricketts, a professor at , the younger Bertha was “home-schooled” by her mother and grandmother because they felt public school was a “waste of time.”

As a young woman, she went on to earn a B.S. degree at Millsaps in 1909 and, shortly thereafter, she earned her M.A. from Columbia University in New York City.

She published her first poem when just a girl of 18, but she had a loftier goal early on -- a career in medicine.

In 1914, she enrolled as a medical student at .  There, she met James B. Sumner, a professor of chemistry and a man of brilliance who had lost his left arm below the elbow in a hunting accident, and who would go on to win the Nobel Prize in Chemistry in 1946 for his discovery that "enzymes could be crystallized."

They married in 1915, and Bertha turned her attention away from a medical degree to rear their four children.  Most accounts say the couple divorced in 1930, although more than one newspaper story described the Sumners as a prominent "couple" residing in the exclusive  suburb of  many years after their reported divorce.

It is said that Mrs. Sumner turned to writing during World War II, choosing the pen name Cid Ricketts Sumner. Besides working in a munitions plant, writing served to take her mind off the worries about her sons and sons-in-law serving overseas during World War II.

A prolific writer, she produced in her lifetime almost 20 novels, numerous short stories, poems and other non-fiction works based on her travels.

Though she spent much of her adult life outside of the state of , she returned from time to time, teaching English at a , high school and French at Millsaps.  She often returned to make special appearances at Millsaps.

Cid Ricketts Sumner continued her writing career well into her senior years, most notably shooting the rapids as a 65-year-old white-haired grandmother on the  and writing about that adventure as the only woman among 10 men in the expedition.

In stark contrast to the kind and gentle nature of her personality and her writings, life ended violently for Cid Ricketts Sumner in her 80th year.

She was found bludgeoned to death in her home in the upper class area of , on Oct. 15, 1970, after her 16-year-old grandson, John R. Cutler, presented at the local police station and alerted them to his grandmother’s body. A hammer recovered at the scene was believed to be the murder weapon.

Young John R. Cutler, the son of the Sumner’s elder daughter Roberta and her newspaper editor/publisher husband, the juvenile was charged with delinquency in the murder, but he entered a plea of innocence.


No further information is available on the web as to the possible motive or the disposition of the case.

(Note: Please see Wikipedia and the above links in turquoise for further information and attribution for the aforementioned "facts" as presented in my prose.  Special thanks to Don Jacobs and Marti Parker for alerting me and helping me research this remarkable Brookhavenite!)
*Click on turquoise words for embedded links.
Posted by Sukie Carruth at 5:27 AM